Should You Use Voice-Overs for Your Game Trailer/Preview? 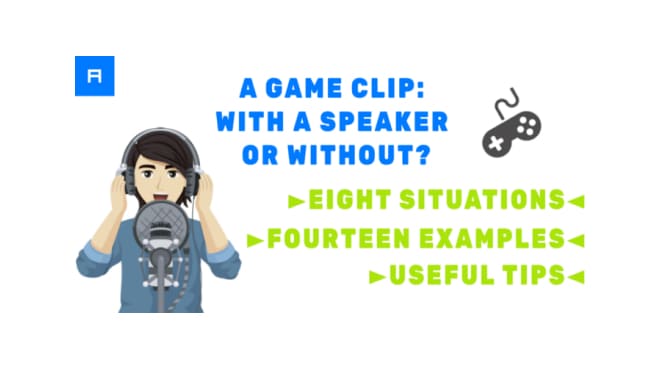 The perennial question for game developers when it comes to producing a game trailer/app store preview — create voice-over audio or stick with text? On the one hand it seems like voiceovers are a must-have today, but on the other, couldn’t you just as easily get away without one? So, when is a voice-over essential, and when might you be ok without one? We’ll try to answer with examples.

Audio in a video consists of three tracks: music, sound effects, and voices. We assume that music and sound effects are needed for any video. But it’s not always as black and white when it comes to voice tracks. So, let’s have a look.

There is some research showing that 76% of promo videos can only be understood if they include audio. Let’s begin by looking at times where a voice-over is a simple must.

Skipping voice acting is a marked risk if:

1. The subject matter or take-away of your video would be difficult to understand without a narrative description

This is particularly true of videos meant to tell a story, such as videos that present the biography of a main character to your audience. Or, where you need to give context on the alignment of forces in a game world to players.

Help your viewers understand your idea. A voice-over with well-timed text can help direct viewers’ attention and guide them through your narrative. Let your viewers follow along with your train of thought.

A quick and easy experiment might help: watch the video trailers for Mafia Empire or Metropolis: Lux Obscura without any sound, and then try with the sound on.

The voice fills in A LOT of the blanks, right?

2. A voice-over is more of a creative than a practical necessity

Voice acting can do a lot of things to your audience: calm, coax, frighten, make them empathize with you, make them laugh… If you want to create an emotional reaction in your viewers, a human voice is your best tool. This is true for any type of video: trailers, teasers, you name it.

When choosing voice actors for a game trailer, it’s important to look for a narrator who specializes in voicing characters. You don’t absolutely have to find demo recordings for the exact role needed for your video: it’s better to evaluate the creative range of a voice-actors’ ability to voice different types of characters. If your voice actor is good at voicing dwarves, giants and space shuttle pilots — he or she could probably pull off your role too.

3. Your video is both promotional and instructional

You want your viewers to understand what to do in your game? You’ll need a good narration.

In this cause your viewers will start the game prepared and be able to immerse themselves and better enjoy the game from the first play. Even if players don’t play through in-game tutorial levels, they’ll still have a general idea of how to play the game. Information can be communicated directly or lyrically, depending on which style best fits the theme of your game.

If your game has already been released, you can judge from player feedback what unforeseen issues most often crop up. To give your support team a break and improve new user satisfaction, try to use your game trailer or explainer video to demonstrate the right way to play and act inside the game.

4. You need a universal game trailer or app store preview

While Facebook turns off the sound on auto-play videos, Youtube goes the opposite direction — or does for now at least. Even if you’re making a video just for a Facebook ad campaign for now, you may later want to embed it on the game’s website or use it as a pre-roll ad on Youtube. And a voice-over would really be a plus here.

Sometimes you may need to skip voice-over audio for your video due to budget or time constraints — although sometimes not having voice-overs may be an intentional, creative decision. So then, what game videos are ok without voice-overs?

You’re probably ok without a voice-over if:

A great soundtrack will signal to your viewers that this is just the intro, while the main act awaits. For this to work the soundtrack cannot be monotonous and follow a strict formula of intro, development and rising action, climax, gripping ending. All plot elements, despite having a different emotional “payload,” follow a standard rhythm.

If you want music to carry the development of your video, make sure you select your music track before starting work on animations. This way you can tie the script to specific melodies or movements in the music. Take the example of the video trailer for PvPets: Tank Battle Royale, where the opening scene is ushered in with the music intro, gameplay footage plays along the main music theme, and the resolution in the animation falls on the final chord in the track.

In the teaser for Heroes of War Magic, warlike music builds atmosphere in the opening scene, then immerses the viewer in the context of battles in a fantasy world, ending with a final, grand flourish in the music in the last seconds to reinforce the call to action.

2. Your video footage is chock full of action…

Just because the action is laid on thick in your video doesn’t mean you should automatically forego a voice-over. But if the scene changes every 2–3 seconds and your video is mostly a compilation of footage of highlights from the gameplay without any clear storyline, climax or resolution, it might be an enjoyable experience to watch without voiceover. Here too you’ve got to be sure you get it right with your music track: it has to match up to the footage’s energy and pace.

3. … or the opposite — the animation is slow-paced

Videos without voice acting don’t have to be intense and thrilling. If the action in your video is clear at even a cursory viewing and voice narration wouldn’t necessarily add anything fundamental to the footage, there may not be a real reason to have voice-over audio.

For example, the trailer for “Alphabear 2” uses text boxes with short bits of text to explain what players need to know about how the game functions. There’s nothing superfluous here, including voice acting, to distract from the whimsically quaint and easy atmosphere of the video.

The trailer for Mahjong Village has a similar approach. The main ideas are communicated with animated slogans, the mood is set by music and the bamboo-meets-beach theme, and the main gameplay action is accented with sound effects.

Video ads on Facebook run without sound by default. Statistics show that 85% of users don’t bother clicking on the “turn on sound” button. Given this, you can get away without voice acting for Facebook ads.

A series of video banner for Guild of Heroes aimed at ad networks, including Facebook, were made exactly in this manner — ranging from 30-second clips to much more bite-size videos.

So, to voice or not to voice?

Skipping the voice-over may be a good way to save money and production time. But in the long run, if you end up wanting to add voice acting after your animation is done, you could end up with a major headache and cost overrun compared to what you would have faced if you included voice-over audio to begin with. Why, you ask?

You will have to “fit” the voiced text with the timing of the footage it’s intended for, and make sure you match what’s being shown to what’s being said. Even the most basic sense that the music doesn’t fit the timbre or pitch of the narrator’s voice can lead you to go through multiple voice actors or end up changing the music. And the new music will probably have a different rhythm, and so your animation won’t fit at all. And so that everything dances in unison, you’re going to have to redo your animation.

If you still can’t decide whether you need a professional voiceover for your video or not, our advice is always first make your video with a voiceover when unsure. Write the text, record the narration, and select music that fits the voice acting. Basically — splice your voice-over into the DNA of your video. And then you can always just remove the voice in one of the versions of your video if you need to.