Posted by Margarita Shvetsova
on 9/23/20 11:49 AM
in localization and translation, success stories

Localizing Updates for the Charm Farm Game into Eight Languages

Charm Farm is a social farming game with a fantasy setting and dozens of magical creatures. The player controls the Enchanter, a wizard who lives in the Magic Forest. The gameplay involves farming, completing quests, building structures, crafting and casting spells, and collecting sets of artifacts. The Enchanter doesn’t have to develop the Magic Forest alone, however — they’re helped by the Shmoos, hard-working creatures who live in shacks on the Enchanter's estate.

Developed by the Russian company Nevosoft, Charm Farm was published on Facebook in 2015. Its magical world is still appreciated by thousands of players from all over the world, and more and more fans are joining the game’s community every day. 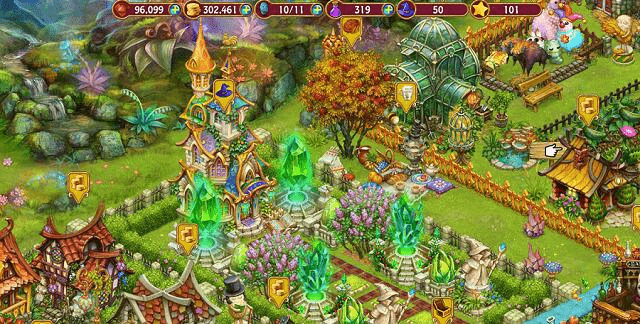 Incidentally, in 2015 we made a magical video about Charm Farm.

Alconost localizes updates for Charm Farm from Russian into English, and then from English into seven other languages:

The game gets 1-2 updates per month. The amount of text in each update varies, but on average translating each release into eight languages takes a week or less.

How a Glossary Can Affect Quality when Localizing Regular Game Updates

Practically speaking, localizing an update to a game is more like augmenting an existing translation than performing a new localization. The new strings often contain references to creatures that have long been familiar to players. Maintaining consistency in the localization means approaching the integrity of the game world with care and ensuring the comfort of players who have grown used to specific names for every aspect of the game.

Charm Farm contains hundreds of names: buildings, resources, items from the store, spells, and much more. In order to make sure that every single unit in the game always has the exact same name, Alconost's managers created a glossary, a kind of dictionary of every terms and its equivalent in each language. As of August 2018 the glossary to the Charm Farm localization project contains over 1,100 entries.

The Nevosoft team understands the importance of having a translation glossary in order to ensure the consistency of the game’s localization, so they accompany the text of every update with a mini-glossary. The terms from these mini-glossaries are added to the core glossary on an online translation platform. As a result, every new update adds 10-20 new entries to the glossary.

In addition to unique items, the world of Charm Farm is filled with magical characters with original names. The Magic Forest is populated by creative creatures such as Rakoonee, Dowls, and Pigflies. When working on updates our translators pay special attention to the localization of names in order to preserve the charming wordplay that is such an integral part of Charm Farm’s world-building. Once the client has confirmed all of the names in the target language, we add them to the glossary.

The project manager adds entries to the glossary on a regular basis, and all translators attached to the project use it when localizing updates. This greatly reduces the risk of mistranslations creeping into new strings.

Need help with localizing your game?

How the Localization Statement of Work is Prepared by the Client

Many years of experience localizing Charm Farm updates has allowed the Alconost and Nevosoft teams to work out a general approach to formulating localization assignments. The client accompanies every string to be translated with two pieces of information: “Comments” and “Maximum length.”

In the “Comments” field the client specifies the exact category to which the new term belongs: plant, item, character, or quest name. Most new terms are accompanied by a link to a screenshot so our translators can have a better idea of who or what they refer to. The screenshots make it easier for our translators to grasp the relevant connotations and transmit the right shades of meaning in their translation. For example, it can help them determine whether a given character’s comical or fiendish side should be emphasized.

The comments also provide information about factors such as:

Detailed comments from the client can significantly improve the quality of an update’s localization. They give our translators much more information and sketch out a field of meaning within which creativity will be welcome and appropriate.

If translators know in advance about any limitation on the available number of characters in a given string they can avoid producing translations that are too long to fit within the space available. Having explanatory comments for every string makes it easier for translators to choose a shorter alternative word that still fits the context.

Alconost would like the thank the Charm Farm team for preparing informative and well-organized localization statements of work for their updates, as well as for the fun we have localizing such colorful, creative texts.

The Project in Facts and Number

«During our many years working with Alconost we have had an exceptionally pleasant and useful experience localizing game content.

I'd like to emphasize how smoothly the entire team works together. Alconost's managers are positive, focused people who always listen to our preferences. This makes working with them that much more pleasant and productive. I can also say with confidence that their translators put their whole heart and soul into their work. In addition to preserving consistency in their localization, the team pays a lot of attention to adapting texts for certain linguistic groups, which helps us communicate to our users the specific shades of meaning that are so often lost in game localizations.

Thanks to Alconost's professionalism, our game can be enjoyed by people from all over the world, and that's wonderful!»