Full HP: How to Get Featured on Google Play and Adapt ASO to Different Countries 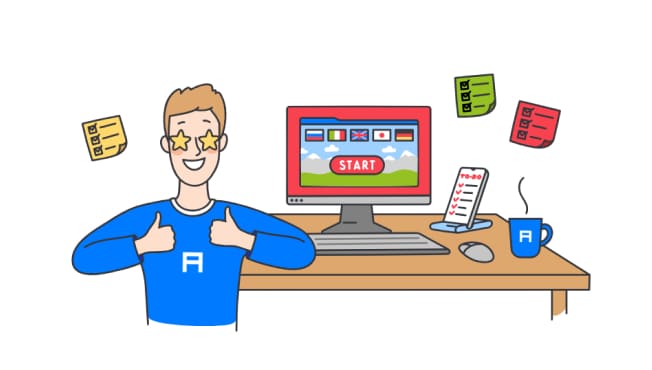 Full HP is an international mobile game development company with 40+ employees and offices in Russia and in Cyprus. Their portfolio includes 8 games, the most popular of which are Mad GunZ (a Google Play editor’s pick) and Blocky Cars (a Catappult editor’s pick).

The Full HP Ltd team translates texts for Blocky Cars and Mad GunZ using Nitro professional online translation service, and agreed to share some of their lifehacks with us:

Mad GunZ and Blocky Cars are accessible in 12 languages. Could you tell us about your approach to the localization process?

Our process is as follows:

Gradually, all the game pages in the stores are localized into new languages, since this lets us reach the most users. It is easiest for us to translate these texts using Nitro, since the translations are frequently ready within a few hours.

While the translation is being readied we analyze keywords and select the most relevant keywords for the game, making sure that these words can be organically inserted into the text.

And where do you localize the game itself?

Previously we worked with a translation agency, but due to the time-consuming paperwork involved (an invoice had to be submitted and payment made via bank transfer before the translation work began) the process was quite lengthy.

For that reason we switched to Nitro completely. Our games don’t have all that much text, so Nitro suits us both for translating store pages and for localizing the game itself. 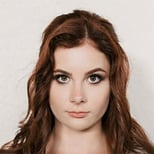 «We tried working with freelance translators, but it was inconvenient and time-consuming. We switched entirely to Nitro, because our translations were ready quickly — as fast as within 2 hours — and all the questions about translation nuances are conveniently resolved through a manager via chat.»

New texts appear when game designers introduce new content into the game. For example, ten new phrases are created that have to be translated for the next release. We send them off to Nitro and add our comments for the translator. As a rule, no issues arise, but if the translator isn’t clear on something we explain via a manager in Nitro online chat.

You mentioned keyword analysis. Tell us how you work with ASO.

We are constantly rewriting ASO for specific countries if we find it necessary. For example, here is a screenshot with data for Germany. The English-language page had a fairly low conversion rate: 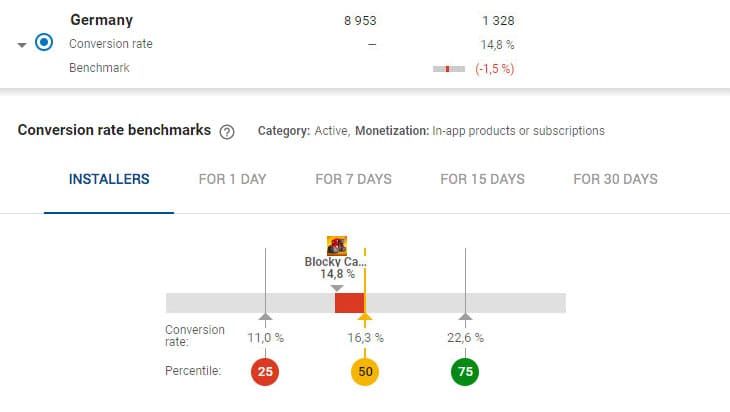 Conversion prior to page localization (Germany)

When we translated the page into German and selected German keywords instead of English, not only did conversion increase (by 25%), but also the number of visitors to the page.

Let’s talk about profitability. Your games are translated into 12 languages. Was it worth it? Wouldn’t the 5 most popular European languages have been enough?

Here are our five most profitable countries:

The same countries top the charts for both games, and the numbers differ but little.

We have many paying users from the countries for which we’ve translated the game. I can cite our localization into Portuguese: the language is not one of the MULTI-5, but players from Brazil are some of the best-paying in our games.

When we released Mad GunZ on an alternative platform, Catappult, at the time of release the game had only been localized into English.

We were featured (the largest jump on the screenshot), after which our numbers dropped back. Since most of the players are from Brazil, it was decided to localize the game and the app page into Portuguese. After that the numbers started to climb again.

Your games have been featured on Google Play. What do you think helped accomplish that?

We try to maintain a certain level of profitability, with minimal bugs (crashes, etc., which prevent the user from enjoying the game), and to produce quality content, and all this led to Mad GunZ being selected.

As for Blocky Cars, here we reached out to the experts: we submitted a request stating that we had a quality game and that we wanted to attract more users by being featured. The requirements were the same: a specific profitability level and minimal bugs.

We also had to add gameplay screenshots with no captions or processing — scenes of how the game actually looked. If a company wants Google to notice them, they should absolutely add at least one or two clean, non-Photoshopped screenshots.

Our thanks to the Full HP Ltd team for sharing their fascinating experience!

Fun fact: In addition to a certain degree of profitability, the number of downloads, and the absence of bugs, localization also affects featuring on Google Play: 99% of featured apps are localized into at least 2 languages, and more than half are localized into 6 languages or more.

We at Alconost are always ready to help with game and app localization into any of 70+ languages. And if your mobile game is not text-heavy, our human translation platform Nitro might be a perfect fit for localizing your game.

or book a call with us