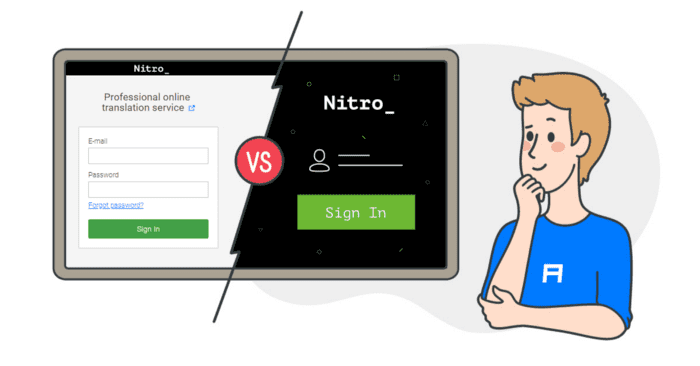 Sometimes software and apps look the same in videos as they do in real life. Other times only a stylized rendering or stripped-down version is shown. But — you ask — why? In some cases the reason is simply about achieving a certain image or style in the preview; other times it’s done more for practical reasons or simple necessity. A few real-life examples will help illustrate when it makes sense to show an artistic representation or mockup of an interface in a video rather than “live” screenshots from the app.

It might seem that nothing could be simpler than showing a service or app in a video. You take some screenshots, animate them, and — voila. This is in fact usually the best approach if you’re making an explainer or instructional video, for example. In this case you want to describe in detail to your user how to set the app up after installing it, or use the features of a service after subscribing.

Or, if you’re making a video giving an overview of key product features which your user could use as a tutorial.

But if you need a marketing, rather than instructional, video, there are at least six situations where screenshots of the actual interface are better replaced with a representative rendering.

What do we mean by “stylized” images of app interfaces?

Stylized representations of an app interface are like mock-up images of a product’s UI. This layout view of an interface demonstrates the key functions in the clearest possible way visually; while the actual interface may look different in the real app, the functions will be the same. And while the interface image is a stripped-down version of the real thing, the way the user interacts with it and switches among options in the stylized UI will be the same as the actual app experience. Let’s look at the video ad for Remote Utilities as an example. Scenes featuring the interface begin at 0:25.

A video with a stylized version of the interface allows you to sell a product’s functionality to customers — in other words, how your product solves their problems.

And with that, we move on to specific reasons for this approach — this is, after all, where things get interesting :-)

1. You need to show several UIs in a single video

A conceptual, stylized version of the design will smooth out any differences in the visual styling of interfaces on display if the video features more than one product. If you are showcasing two related services in a single video, for example.

A great example is the video ad for the cloud platform Tiwri, designed to allow multiple users to work on technical documentation. Tiwri is a bit of an extension of the desktop app Dr. Explain, adding the feature of allowing teams to work together remotely. To give the complete story in the video both apps need to be shown: the cloud program and desktop software.

When users can configure menus, color themes, and front-end interfaces themselves, it’s difficult to show a definitive version of the product design. The default look may fail to communicate that much to your audience, which is seeing your product for the first time.

This is also the case for products with a wide range of functions or which are designed with advanced users in mind. Showing the actual interface would mean having video frames cluttered with all sorts of buttons, widgets, and text, and your audience won’t even know where to look! A rendering of a stylized version of the interface will let you replace blocks of text with simple bars. And buttons that are used in the UI but don’t get shown off in the video can be simply replaced by gray blocks. This way you can suggest to your audience that there is much more to discover in the app without overwhelming them.

3. You are marketing a service rather than a product

Consider for example: you are an internet marketing agency, and one of your services is to enhance site usability, and you want to showcase this service in an advertising video for potential customers. Simple words describing your service may fail to arrest your potential customers’ attention — but if you can instead show them optimization of an actual site, their attention will likely fix on the product the site covers.

A stylized image of the interface here solves the problem. You can show the homepage of a fictitious site with clumsy navigation, and use animation to capture its transformation right before the viewers’ eyes. For example, put main blocks into compact tiles, drag the search bar into visitors’ field of view, and add flashy buttons with calls to action. This way you’re not only explaining to your audience what you do — you’re showing them how you can help them transform their product.

This was the underlying strategy we used for our video on SEO services by Promodo. Just after the 1-minute mark the video shows how an example site can be reorganized by sorting sections by grouped key words. And, by the way, if you’d like to catch a glimpse of a pink winged raccoon — skip to 1:30 :)

In a word, a stylized version of an app interface avoids the weakness of being tied to specifics. It helps the audience see only what you’re prioritizing.

For example, in a video we made with Netologiya on Youtube video optimization, we not only created a pared-down rendering of the interface, but even included a stylized “video in a video.” We intentionally went for a slight fantasy theme here: if the demo was more life-like, it would be harder to perceive it as “just an example.”

In the above examples a stylized interface was the best choice in terms of video design and clear communication of the take-away ideas to the audience.

But there are also times in practice where using a stylized rendering of a UI helps creators get a video done by deadline, simplifies its localization, or helps save money on updated videos in the future.

Let’s take a look at these types of cases.

4. The video release needs to be timed to coincide with an app release

Producing a video is something that needs to be planned, as production takes a few weeks, and sometimes months. If you haven’t finished working on the updated version of your app when the video script is still being written, and the video has to come out at the same time as the app, you’ll need to use a stylized rendering of the interface.

This is the best solution if you don’t have anything to take “live” screenshots of. Screenshots from the old version won’t be effective for the purpose of the video, while screenshots from the unfinished update may confuse users. A stylized version of the interface is stylized for that very reason — to not appear too much like an actual one. It solves the problem of a video not matching up to the real thing. If windows in the video are stylized or simplified, that matters less than how they looked in the previous version of an app, and how they will look in the new one.

Take for example the app PoZnakomym, which came out with version 2.0 in March. A video was made to go alongside the release of the new version. In order to untether the video production process from work on the app, the customer decided to show the interface in a stylized rendering.

Having a localization is a clear win for users, who will have a much easier time using an app in their native language. So if you’re making a video for French speakers, and you have a French-language version of your app, it’s best to show the interface in French in your video — n’est-ce pas?

The service Bitrix24, for example, is available in 18 languages. When creating a video in English, German and Russian, we had to not only replace the voice acting, but also to show the interfaces in the right target language. Localization was greatly simplified by the fact that the video used a stylized UI.

Here is the German version:

You can compare it with English and Russian versions.

6. The App will be updated/changed

Now we’re not talking about transforming a fitness tracker into a pregnancy planning calendar. This sort of update would affect not only functionality, but also product segment and marketing, which would mean a thorough, sweeping reworking of all promotional and marketing materials — video included.

But if you wanted for example to add night and day features, change walking animations, or redo diagram types in your fitness tracker, you should probably think of creating a video with a stylized, rendered interface. If you’re planning to add features, this could have a major impact on the appearance of the app without making any serious changes under the hood in terms of functionality. And you will be able to use your video as long as you don’t add a function which cannot be featured in your marketing video.

A stylized version of your interface is a great option if what your product does is more important than how it looks.

If your app is updated frequently, a video with a generalized or stylized version will prevent you from having to retake screenshots at every update. Even if some major update is added to your app that needs to be featured in a video, you can simply adjust only the interface elements that were affected by the update. With screenshots it’s far from guaranteed that this would work. Little snippet inserts and patches may differ from screenshots in other frames by the most minor details, but you’ll have to retake the screenshots all the same to ensure consistency.

What about a hybrid?

Sometimes the actual interface can be nicely subbed by a stylized rendering without a disconnect or clash in visual style or sense.

In the video for the HelpDesk plugin for Jira, the main function is shown with “live” screenshots, while branding features are shown using an animated graphic with a stylized interface. The scene on branding is at 1:38–1:46.

This, however, is more the exception than the rule. Combining interfaces with different designs and level of detail for the same product may confuse the user.

If a product video uses real screenshots, but you don’t want to use screenshots to demonstrate a particular feature, it is best to showcase the feature with motion graphics, without trying to recreate the real interface 1:1.

Having screenshots does not automatically mean that a video can be no more than screenshots. For example, the video about remote management for SecureDrive BT and SecureUSB BT devices features models of the devices themselves in 3D, scenes with 2D motion graphics, and screenshots.

View more examples of videos with stylized interfaces in this playlist, and more with screenshots — here.