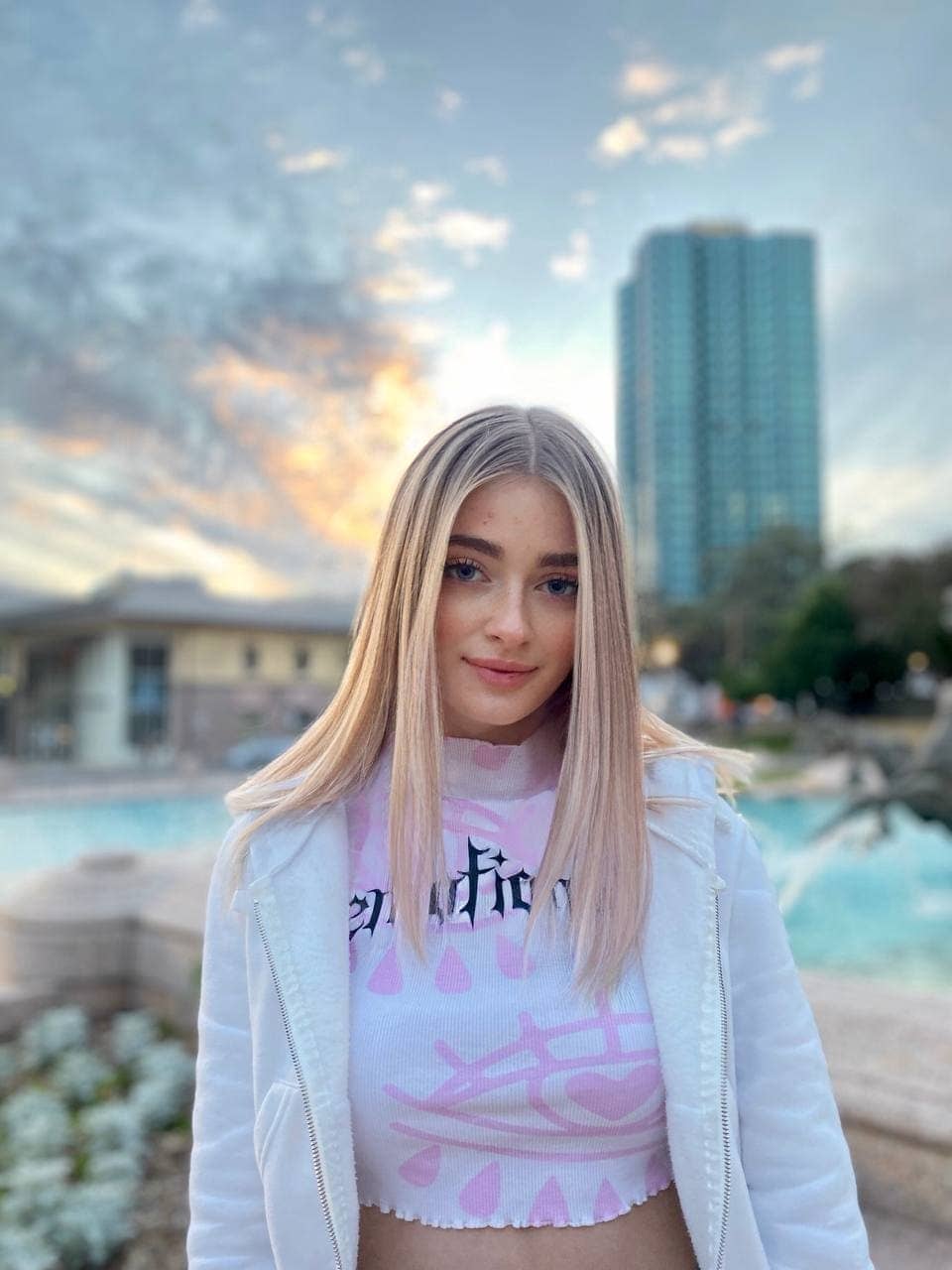 How You Can Benefit From Localization Testing

As a developer, you may have implemented functional testing of your product; possibly you've even done it yourself. Since you’re reading this article in English on an international tech-focused website, we’ll also assume that you’ve implemented localization into your product, or at least you're considering it. But did you know that high-quality localization involves localization testing as its final step?

What is localization testing?

Localization testing is a thorough inspection of the translated app, game, website, or other product for the purpose of ensuring that it contains no semantic and contextual errors, mistranslations, or linguistic and visual issues. Localization testing also checks for correct usage of date and time formats, UI elements, currencies, measurements, punctuation marks, and overall vocabulary.

Localization testing helps identify and eliminate semantic and technical errors in a product’s textual content before the localized version of the app or game reaches users.

For those who love precise term definitions: although LQT (localization quality testing) and LQA (localization quality assurance) mean roughly the same thing, a tiny difference can still be distinguished. LQA generally means that testers go through localized strings and compare them to the originals, while LQT refers more to checking the localization within the product. It's best to clarify these subtle nuances with the particular localization testing company you’re looking to work with: make sure you're talking about the same thing!

How is localization testing different from functional testing?

Which type of testing should be done first? Can you assign both functional and localization testing to a single person? Let’s find out how these two types of testing coexist, and what skill sets you should look for when hiring skilled professionals for both roles.

Functional testing ensures the proper operation of each application feature. It involves checking the website, game, or app against predetermined standards of performance. In short, this type of testing looks at whether the app or system is functioning according to the technical expectations outlined.

Functional testers have a solid technical background under their belt. Aside from an impressive hard skill set, this type of testing requires attention to detail and strong time-management skills. But it doesn't require delving deep into every intricate nuance of the product’s context, or of the target market’s cultural aspects.

In contrast to functional testing, localization testing is less a technical procedure than it is a careful read-through to check how content will be perceived.

Testing of this type can be conducted either by going through the product using scripted scenarios provided, or by checking screenshots of the product in use. Errors that localization testers typically look for include:

Get Your Localization Tested By Native Speakers

In a nutshell, the reason why a functional tester is unlikely to succeed in localization testing and vice versa is because these two services require different skill sets, as you can see in the table below. 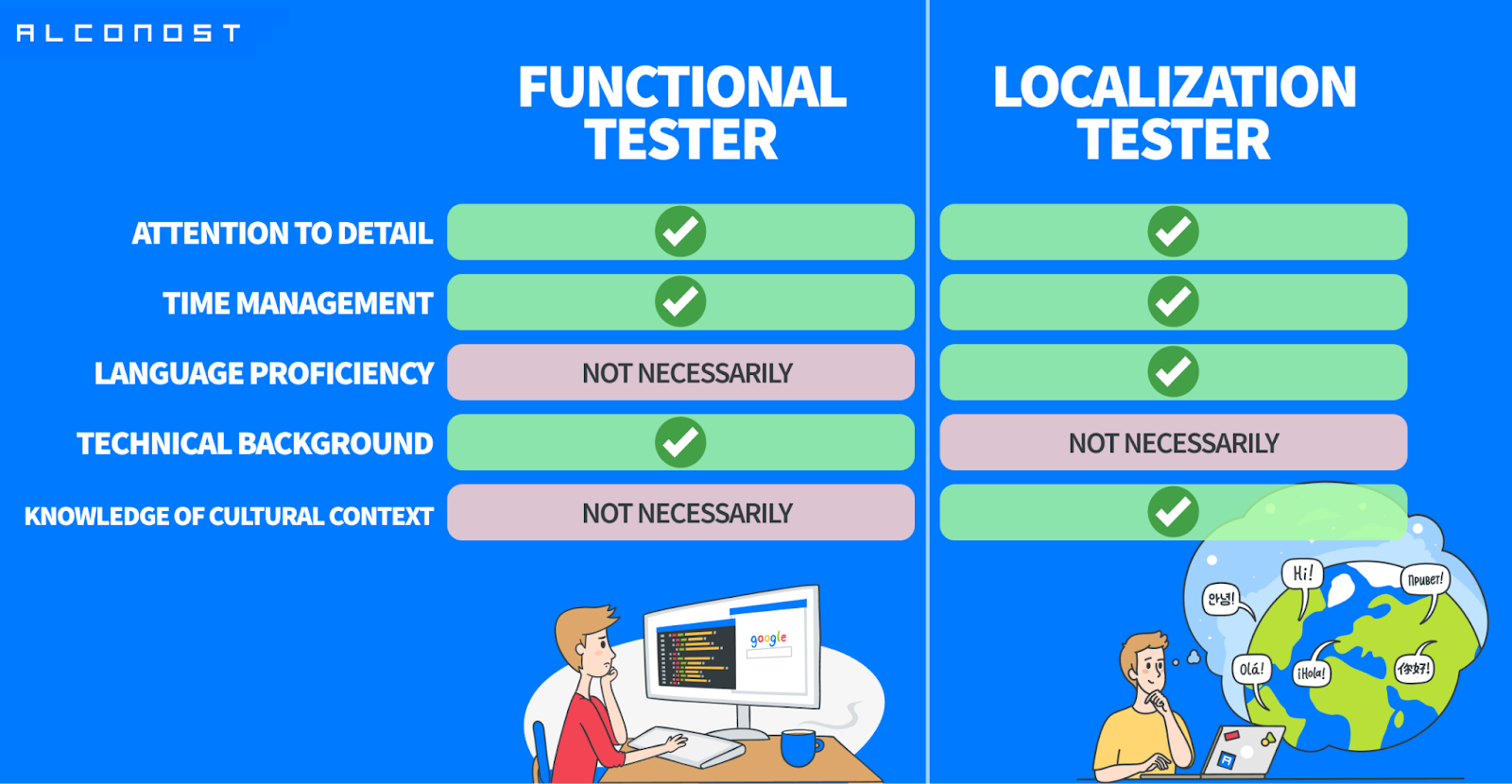 So don’t hyperfocus on minimizing expenses — as you can see, functional and localization testing are designed to check different aspects of the product. That’s why experts in both fields have different core competencies. An actual human being who is a native speaker of your target language has the best feel for particular shades of meaning, like sarcasm, and particular cultural nuances, like politically correct jokes.

When preparing for an international launch, both localization and functional testing are vital because they ensure that no technical or linguistic errors slip by before the release. Testing in general is designed to ensure the best first impression possible when your product goes live (and you can’t make a first impression twice!), so we recommend that you not neglect testing, either functional or linguistic! Both are important.

Need an example of where localization and functional testing intersect? One time Alconost was testing localization of a web project that had an address form template. What could possibly go wrong, you might think? But the devil is in the details, and in this case it was the order of the address elements. For example, in the United States the address line starts with the house number, while in Germany the street name goes first. For a proper localization the order of the variables must be changed. This is the kind of mistake that localization testing can detect, but only the developers themselves can fix.

Detect Localization Errors That Can Cost You Clients

Combining automation with manual operations is a common practice for functional testing, where creating automated test scripts is recommended to accelerate the process. Handy tools that simplify routine tasks are also widely used in localization. Glossaries, computer-aided translation (CAT) tools, and translation management systems (TMS) help translators do the bulk of the initial work. With localization testing, however, it's not quite that easy: here you need someone from the target culture who's a native speaker of the target language to do the bulk of work.

“We need to remember that automation doesn’t come out of nowhere — there's still human input behind the scenes. You can probably train AI to detect functional mistakes and report them, but when it comes to the linguistic aspect of the project, the participation of an attentive native speaker who's able to see the whole picture and be aware of the context is still the best scenario. The fact is, we do employ some AI-based technologies in certain localization projects, but even here we always invite a native-speaking editor who polishes up the final result. All this confirms my view that at this point AI can't replace humans in localization testing.“

Localization testing is the final step in the localization workflow, and it is still humans who put the finishing touches on the translation before it goes live.

The chief purpose of automation is to simplify the process and reduce the client’s expenses. However, you can actually cut them down yourself at the stage of preparation for localization and localization testing.

How to prepare for localization testing

We wouldn't say that preparation is something you can’t skip. But consider that a localization testing company usually bills at an hourly rate for localization testing services. If the localization quality assurance tester has to slog through the entire game or app to check one screen of dialogue, you'll simply pay for more hours than you could have. Simplifying the process in advance means you save yourself money.

All Set? Request a Quote for Localization Testing

3 reasons to outsource localization testing to a language services provider

As with pretty much any service, it’s always smart to delegate what you can’t do on an advanced level to a person or enterprise with niche expertise in the solution you're looking for. In this article we elaborate on the arguments in favor of choosing a localization testing company. Below we’ll walk you through the key 3 reasons. 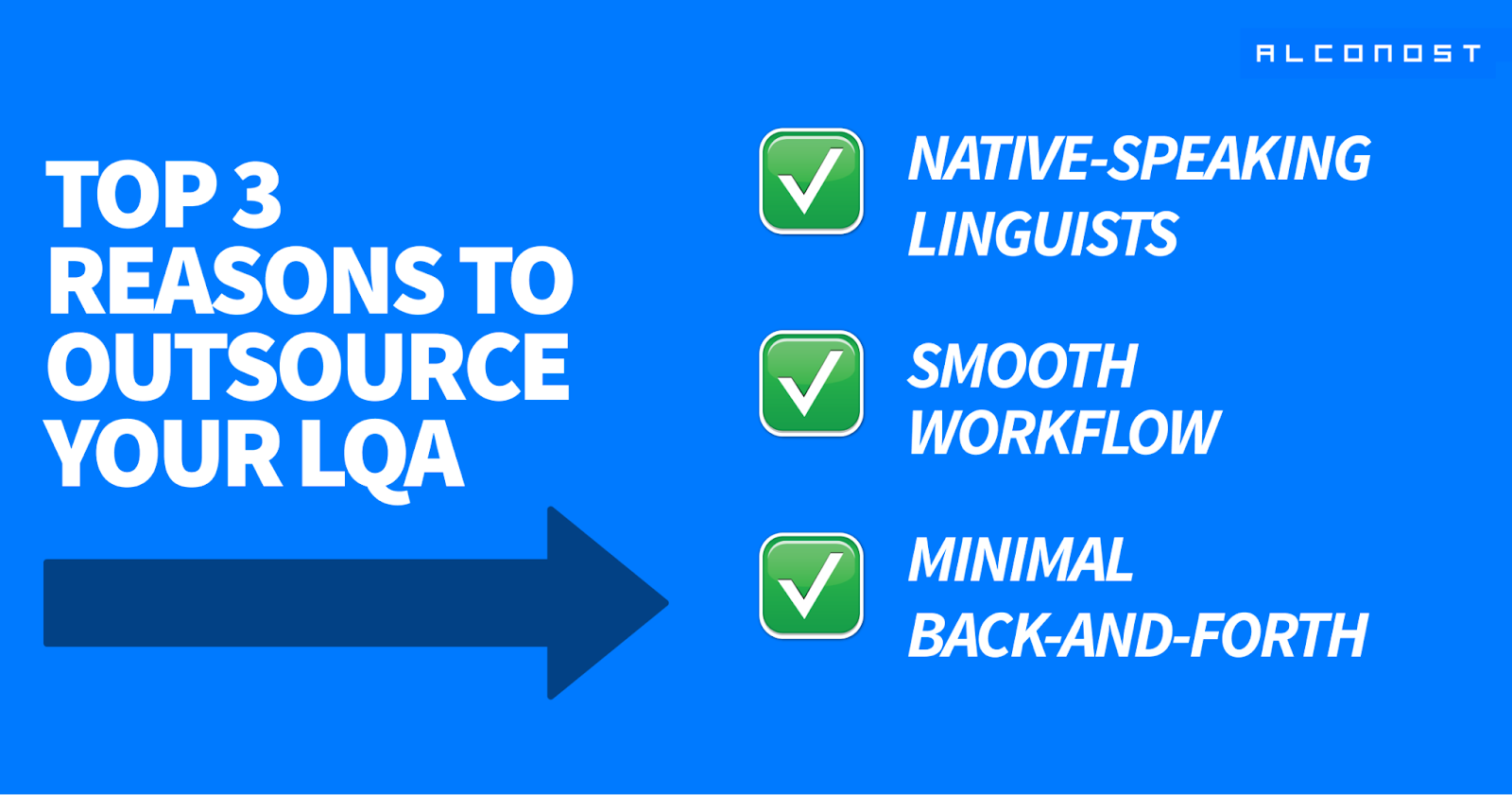 When you order localization testing services from a language services provider, testing is performed by professional translators who are, first, native speakers of the target languages, and second, experienced testers who are assigned to the project based on their previous experience in your particular niche.

For example, at Alconost we carefully select testers from our team of more than 600 native-speaking translators, taking into account their experience with particular types of software, translation quality scores, and client feedback. Note that for localization testing we select translators from among the top specialists who are already part of our team and whose language proficiency is indisputable. This ensures a level of quality that ordinary freelance or community testing platforms cannot guarantee.

Localization vendors use modern translation management systems and approaches that take the localization process to the next level. When outsourced to a language services provider, localization is managed on a cloud platform that offers convenient workflow management tools. The localization manager sets a schedule that the team diligently follows.

In addition, if you order localization services and then decide to test your localizations using the same team of translators, you save time. That’s because the team is already familiar with the context and knows the key information about your product. On top of that, the localization manager asks the right questions to unpack your priorities and key objectives for localization testing, which helps to wisely manage the time allocated for testing. This helps to reduce the cost — as we mentioned, localization testers are usually paid an hourly rate, so time literally becomes money. ;-)

An experienced localization manager also knows the bottlenecks of different language pairs and determines the nuances to consider first and foremost. For example, an unique feature of Japanese is that there are no spaces between the words. When localizing from English to Japanese, you need to take this into account and pay special attention to paragraphs and strings. It's the localization manager's job to prioritize checking certain aspects of the target language and ensure a smooth localization testing workflow.

As the cherry on top, you only need to be actively involved in the process at the initial stages of briefing and setting up the localization process. After that you only keep in touch with the localization manager, who communicates with the rest of the localization team, sets deadlines, monitors the workflow, and clarifies critical questions when necessary.

Human beings are social animals who thrive on communication, but that communication differs from one culture to the next. How your product communicates with its end users determines their loyalty. Localization testing is crucial because it ensures that your product speaks your users’ language, eliminates potentially offensive or inappropriate jokes, and embraces the power of local humor. If your users enjoy your high-quality product enough to stay and keep using it, they’ll be sure to tell their friends about it, as well!

With the high number of skills required to perform high-quality localization quality assurance, we understand that it can be challenging for companies to set up the process internally. Alconost offers a solution: professional localization testing services backed up by 18 years of experience in the translation industry, a pool of 645 native-speaking translators working with 100+ languages, and reliable services endorsed by over 2000 satisfied clients worldwide. Get a quote by filling out this form, or book a free consultation with our team to find out how we can help with your particular project.